Hi, what are you looking for?

With this presentation, the Uforia Music Series is relaunched, a Univisión project that will offer monthly virtual concerts by renowned artists under the title of “Uforia Live”.

Bad Bunny will offer a virtual concert on September 20 in celebration of Hispanic Heritage Month, reported the Univision platform Uforia.

The presentation of the Puerto Rican urban artist will be broadcast through the page UforiaMusic.com -as part of the return of Uforia Music Series-, on his Twitter and Twitch account, and on Bad Bunny’s YouTube profile.

“We are extremely excited to celebrate the richness of Latino culture during this Hispanic Heritage Month with this unique experience, and to commemorate the resilience of Puerto Ricans three years after Hurricane Maria,” the president of Univision Radio said in the statement. , Jesús Lara.

“We are very proud to present the art of Bad Bunny, who has had a profound impact on our culture and the music industry on a large scale,” Lara emphasized.

The presentation of Benito Martínez, Bad Bunny’s real name, will mark the re-release of the Uforia Music Series, made up of a group of monthly virtual concerts of renowned artists until December under the headline of “Uforia Live”, the statement added.

Upcoming artists and show dates will be announced later.

For Puerto Ricans, the presentation of Bad Bunny on Sunday is an opportunity to see him live, after the artist had to cancel his next October 30 and 31 shows that he had on the agenda at the Hiram Bithorn Stadium, in San Juan.

Similarly, the artist became the first reggaeton to appear on the cover of the American magazine Rolling Stone.

The third debuted at first place on Billboard magazine’s “Top Latin Albums” list, causing the other two albums to drop to second and third.

However, “YHLQMDLG” became the first album by a Latin artist to reach the second position on the global “Billboard 200” chart.

Likewise, the artist has managed to place 24 singles on the list of the global “Hot 100”.

Advertisement. Scroll to continue reading.
In this article:Bad Bunny 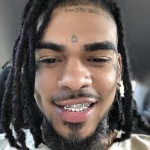